Celine Spectacular: "Through The Eyes of the World"

On Tuesday evening, my friend Will Hunt invited me to the New York headquarters of Sony Records, for a screening of the upcoming Celine theatrical release, "Through the Eyes of the World." Think of it as a parallel to Michael Jackson's "This Is It"—only she lived to tell.

The film will be released worldwide in movies theaters for a limited one-week engagement and honestly, I wasn't sure what to expect. Is this a vanity project? “Look at the places I've seen, see the hundreds of thousands of fans who love me...” On the contrary. The 90-minute production—stunningly shot in HD—offers an often humble look at the artist but more so, inside the woman, the mother and the wife.

As she travels across five continents and 23 countries during her 2008/2009 Taking Chances tour, Celine visits the site of a concentration camp in Germany, and breaks into sobs, saying to husband Rene, "I just can't take this anymore." In South Africa, poor children sing to her—and she says something to the effect of, "You have changed my heart. I will never sing the same way again."

In China, a reporter asks her an absurd, leading question about "the power of our nation," and she reveals her seasoned savvy, turning her response into a revelation about hope and self-empowerment. She isn't phased for a second.

One of the great moments in “Eyes” comes as she scolds security guards for bumbling her exit from the stage; 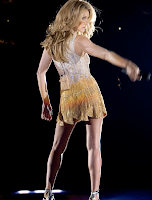 she tries to greet fans, but the big guys walk in front of her and step on the back of her dress. She means business, but it ends with hugs and thank yous, by name, for each of the dudes. Another fun scene: reviewing choreography for a show, all while having her hair done. She quickly blurts out lyrics, blows out sounds effects for instrumentation and computes her moves; it’s funny as hell.

Throughout, Celine is accompanied by Rene and her (then) 7-year-old son Rene Charles, who

seems more or less oblivious to the fact that his mama is among the most famous entertainers in the world. The caring and attention that Celine and Rene devote to him throughout their around-the-world adventure—on a safari, playing golf, singing around the dinner table, running around a hotel room—comes off like an extended vacation for R.C.... It shows the effort his parents are making to offer him the best, without bringing attention to his overt privilege. As a result, he comes across like a pretty normal kid: not a precocious, entitled brat. Good parenting.

Celine also deals with a couple bouts of serious illness, where they are forced to reschedule engagements, including a sweep of nearly half a dozen dates in the U.S. Her disappointment is obvious, but so is the dire fear when her throat tightens and her neck is sore. As her throat is painfully probed by a fiber optic tube, a tear rolls down her cheek, but she says nothing. She performs one night, despite feeling sick, worried that her voice is going to give out, and paces nervously afterward, as one of her team members says, "It's over; you made it through," and Celine says, "Yes, but at what price?"

Then, of course, there are the performances. We see clips from around the world, including

some spectacular editing as she sings the same number in more than two dozen countries. It shows the sheer breadth of this world tour. We hear good bits from many of her signature hits, but there are also surprises as the repertoire changes from locale to locale. One of the strongest is Queen’s “The Show Must Go On,” a tour de force that deserves to be recorded for a future studio album. Amazingly, the film also cleverly ties the anecdotal material into each performance; somehow, in each case, the narrative relates to the theme of each song. God knows how much shooting must have gone on for more than a year, but “Eyes” is put together like an intricate puzzle. The editing is sheer genius. As it must, the film peaks with “My Heart Will Go On,” and we see the full

number performed—again spliced with scenes from around the globe.

“Through the Eyes of the World” is definitely designed for fans, but there won’t be a single among the hundreds and hundreds of thousands who attended the Taking Chances tour, who won’t feel a bit of the thrill once again while watching this film. Stunningly shot, broad and beautiful, it’s a technical spectacle. But even more, it’s the most complete and intimate look, in living color, that we’ve ever had of the world’s finest singer. Even the coldest critic—and god knows Celine has been torn from limb to limb by the worst of them—cannot deny the potency of her humanity here—from hand to heart. 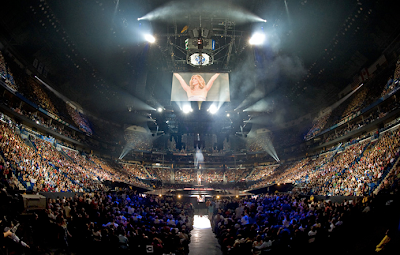