The reviews have hit the newsstands (okay, the web) for "Celine: Through the Eyes of the World,"

and I'll be damned if they're not decently balanced. Many critics actually allowed themselves to enjoy the oftentimes less-than-glamorous look inside the singer's life, in her limited-release film, which hit theaters this week:

USA Today: "It would be wrong, or at least simplistic, to dismiss Celine as a globe-spanning ego trip... There's something oddly endearing about the utter lack of self-consciousness with which 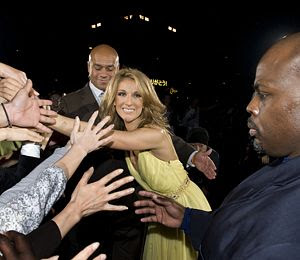 Dion shows off, and shares, her blessings... Even if you're not in this film's target audience, you'll likely have been seduced—or perhaps worn down—into a sense of respect for this diva, who is, in her fashion, more real than many of her less ostentatious peers."

Richmond Times-Dispatch: "Whether she's cuddling a precious lion cub in South Africa, struggling to maintain her composure as she's awarded France's Legion of Honor Medal or prowling through 131 concerts in killer stilettos and billowing capes, Dion is warm, maternal and fiercely ambitious. She's also—and this may come as a shock—amazingly real."

The Globe and Mail: "The film (is) probably accurate in its portrayal of

her general good humour. Detractors would be surprised at how genuinely funny she can be, dancing around Angelil during a sound check, improvising a goof on Blue Suede Shoes and shaking her legs like some ungodly cross between Elvis, Charlie Chaplin and Mr. Bojangles."

Boston Herald: "Thankfully, the movie doesn’t censor Dion’s less-than-perfect moments or her frequent goofball antics. The film seems intent on letting fans see Dion beyond the diva armor, and it succeeds. Whatever well of inspiration Dion draws from while onstage, she seems to take it with her when the lights go down."

Toronto Star: "You meet a tough woman here, one who can hold a complex world tour together, but even she starts to fall apart when her vocal chords become dangerously inflamed

and we visit the throat specialist with her, staring into the fragile machinery that drives those powerhouse sounds. If you like Dion, the singer, then you will love Céline: Through the Eyes of the World. But even if you don't, you can't help but be impressed by this fascinating portrait of a superstar trying very hard to keep her feet on earth while her career keeps soaring ever upward."

Of course, there are still those critics who refuse to open their own eyes. I won't condone the prissy critiques with any links here, but some of these comments are utterly absurd:

of suspense toward the end of the film but, for the most part, the pressing crises involve whether Dion will pick a new dress to be part of her stage wardrobe."

"The journey risks as little as possible, with everything arranged, rehearsed, and strategized for minimal surprise. Like Starbucks and Volvo stationwagons, Céline is all about reliability."

"A breezy, briskly edited chronicle of Dion's tour, Stéphane Laporte's mild hagiography crams a few timid peeks behind the scenes of her elaborately choreographed spectacle between concert snippets and gushing fan testimonials. But rather than capturing a restless star pushing at her own boundaries, "Through the Eyes of the World" finds Dion sitting pretty, on top of the world and happy to stay there."

The real proof, of course, will be in the numbers. Will be fascinating to see how the film fares with audiences this weekend.