BY CHUCK TAYLOR: On rare occasion, a performer is so natural, so fully oneself onstage, that you can’t imagine there’d ever be any question of their calling. Such is the case with adult/jazz artist Nicole Henry—but with a bonus. Not only does she own center stage, she graciously shares it with her audience, including them as active participants.

Miami-based Henry’s showcase at Metropolitan Room Saturday, Feb. 13, marked her ninth appearance at the intimate New York space over the past year—most of them sold out. Clearly, her fans return time after time. 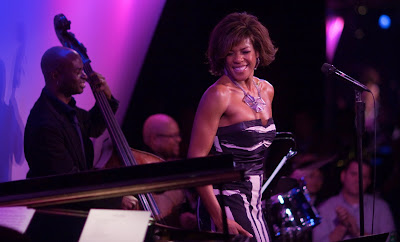 Nicole Henry is a new presence for me—but it doesn’t take more than 90 minutes to add one’s name to the roster of dedicated followers. With three globally released albums since 2004, two of which topped HMV’s jazz sales in Japan—including the latest, “The Very Thought of You,” which also reached No. 7 on the U.S. Jazz Album chart—her accompanying triptych of appearances reads like a diplomatic road map: Paris, Montego Bay, Russia, Spain, Seoul, Shanghai, along with countless venues across the States.

All the same, Henry is not yet a household name. That likely has more to do with her repertoire, which relies on the classic American songbook, constantly at risk of fatigue, than her talent and resourcefulness. For sure, she is a sight to behold—a befitting diva—impeccably dressed by wardrobe sponsor Nicole Miller. She is tall, statuesque and graceful. Henry has been compared to a young Whitney Houston, with a sumptuous facial structure that God must have modeled on a particularly inspired day, but she is more expressive, with august moves meshed with a frisky demeanor that surpass comparison to that other singer.

At her Metropolitan Room performance, Henry thankfully dishes up distinctive new recipes for her well-played standards. Hoagy Carmichael’s “The Nearness of You,” for instance, which has likely been performed 100 million times, comes off with a saucy purr, as she delivers the opening lines, “It’s not the pale moon that excites me, that thrills and delights me/Oh, no, it’s just the nearness of you.” Her take is the sonic equivalent of a gentle, slightly suggestive caress.

On “Love Potion No. 9,” Henry milks every word with playful cunning, practically nudging her minions, as if she’s saying, “Good one, huh?” A clear audience favorite is a stately interpretation of Oleta Adams’ potent “Get Here,” a song that is technically arduous, but Henry’s velvety outpouring is so mesmerizing, she could rank as one of Homer’s sirens in “The Odyssey.” Of course, on Valentine’s eve, how could the encore be anything but Rodgers and Hart’s “My Funny Valentine,” which stood up fine, despite its well-tread history. 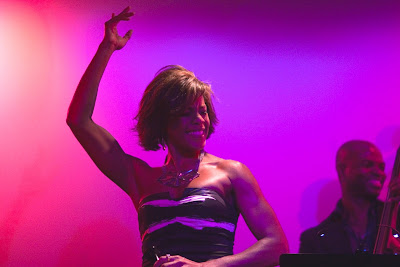 What keeps the show fresh is Henry’s seemingly unrehearsed banter. She’s smooth and anecdotal—but not so scripted that she doesn’t interact directly with the reactions of her audience. After singing “Waiting In Vain,” she coyly asks, “What are you guys waiting for?” When the shout-out is “cocktails,” she quickly responds, “Now that’s something I can help you with,” faux motioning that she’ll deliver them herself. Mentioning that her father is in the audience, she rollicks through a verse and chorus of “Fever,” and then teases, “You don’t want your daddy to know you’ve had the fever.”

She is also accompanied by a trio of masterful musicians, who are all given the opportunity by Henry to shine in their own right: Helen Sung on piano, Richie Goods on stand-up bass, and Alvester Garnett on drums.

Vocally, Henry’s greatest strength is one of the rarest gifts a singer can offer: restraint. Once in a while, she lets loose, hitting and holding the anthemic diva notes with the precision of Whitney. We know she can… but most often, she recognizes that less is more. A spot-on whisper or satin-brushed vocal sigh, when talent is this innate, is more forceful than constantly crashing through the clouds.

And yet, Nicole Henry has all potential to do just that. Hers is a voice of divine presence, a true gift from the heavens.