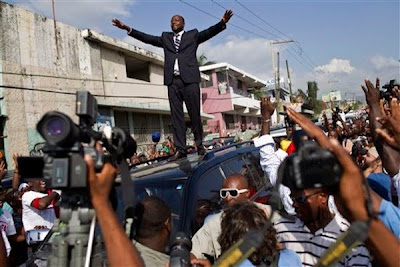 If Sarah Palin can be considered for Vice President of the United States... why not Wyclef Jean for President of Haiti?

You've got to be kidding. Really. Musicians have long stuck their noses into political rhetoric. My consistent view: Sing and shut up. With tone-deaf hip-hop artist Wyclef,

the only thing more frightening than his believing he's qualified to run a nation—mind you, one that the 37-year-old college drop-out hasn't lived in since age 9—is the fact he's being taken seriously.

He admitted on CBS News, "I have no qualifications for president; I have qualifications for a leader," but then blustered, "America has Barack Obama and Haiti has Wyclef Jean," as well as the equally absurd: "People say, 'Are you running for president?' I say no, I am naturally being drafted by my country to serve my country." Smells like opportunistic bullshit to me.

in back taxes—in addition to pocketing donations to his Yele Haiti charity for his Manhattan recording studio and Haitian TV production company. That's called a crime, as far as I know.

Current Haitian President Rene Preval is constitutionally barred from seeking a new term in the Nov. 28 election, leaving an open field. The winner will inherit a decimated capital, 1.5 million homeless and infighting over billions in reconstruction funds pledged after the January earthquake killed an estimated 250,000 people.

God help Haiti. All the more.