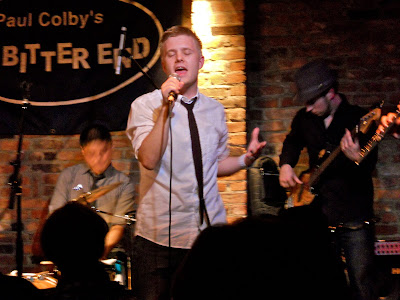 Among so many hundreds of seasoned artists that I've witnessed

over the past 15 years, few possess the innate talent, showmanship and parcel of savvy songs that up and comer Adam Shenk displayed at his live performance Tuesday, May 19, at Manhattan's Bitter End. Despite contemptible weather, more than 100 turned out to celebrate the release of his sophomore CD "Suitcases," 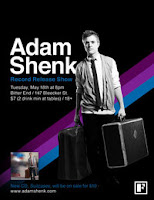 and to cheer on this burgeoning talent.

Shenk recorded the disc here at 2C Studios in Brooklyn over the course of six months, with Ayhan Sahin producing; and I was witness to pretty much every note he sang. I've heard the best and the worst—those that stand before the mic and sing an entire song through its duration to their heart's content, as well as others that record word for word, line by line, to have the best among a dozen takes sliced together like a 5,000-piece 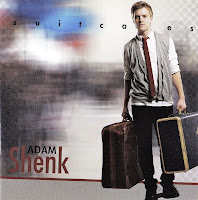 puzzle. Adam represented the former: The boy can sing with passion and precision.

Hearing him live for the first time, I was witness to those variables that turn great songs into a memorable performance. His moves, playfulness, keen attention to the audience and the clever inclusion of a couple covers—most notably TLC's "Waterfalls," which he used as a showcase for his

band—demonstrated that Shenk can deliver the goods with the accumen of a time-tested, worldly pro.

In fact, I was so impressed that I signed on to write liner notes for "Suitcases" (pictured here, click to see readable version).

Above, Bitter End with Adam Shenk's band onstage. Below, his fan club, including: Dennis, Ashley, Ayhan, Ghia and meese. 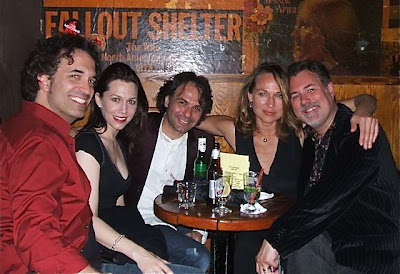 In the house: Adam's gracious parents. 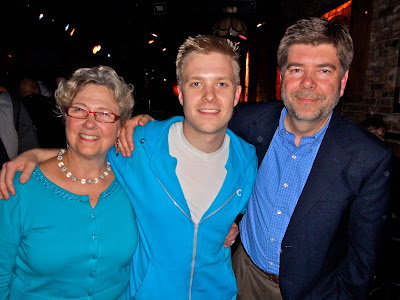 Tags: Ayhan Sahin, on the town