At last… a new actionable role with the U.S. Census Bureau—and this is gonna be 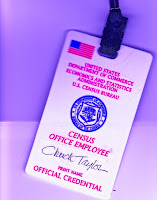 good. For the next several weeks, I'm helping clean up scores of incomplete questionnaires cascading into the office, whether because of a “hostile” situation, resident’s refusal to cooperate or, unfortunately, in many cases, cause the assigned staffer simply doesn't have a clue.

enumerators in Brooklyn knocking on doors were freshly hired within the past month, endured four days of training and were then shooed into the field.

More than a handful appear to not only lack the

gumption to fill out the (rather complicated) paperwork required, but—more critically—seem void of common sense. You can “learn” somebody to fill out a form, but using their noggin logically… pretty much got it or not, know what I mean?

supersede smarts: They’re micro-assigned to specific neighborhoods; are fluent in languages other than English; or are available to work weekends and nights.

Going through a two-foot-high stack of Census forms today that didn’t make the grade was either the most hilarious exercise I’ve endured—or the most tragic. Without giving away any specifics and getting my ass in

trouble, let’s review verbatim enumerator notes, shall we? Some suggest the staffer is better suited to a career at Taco Bell. Others are wildly entertaining, based on the absurd situations these poor folks found themselves in:

• “Be careful. She is threaning. She said they send it in. She was pointing her finger at me and was louding.”
• “He said not to bother him on the Sabbath. It was Thursday.”
• “The resident referred to the Census as harassment and molestation and threatened to call the police. Visibly agitated.”

• “Five drunk and high men were making sexual remarks, so I said, ‘Have a nice day' and left.”
• “There was a huge dog off the leash blocking the entrance. I was scarred and turned around and leave.”
• “She looked at me through the door screen and pushed me.”

• “An old lady answered the door and started to yell at me. Her husband tried to get in my face. Andrew was with me and thank God for that. I was really scared.”
• She had a look in her eye that was threaling, and I think she was going to spit me. I didn’t go back.”

Being an enumerator: $18.75 an hour. Actually receiving a high school diploma: priceless.