Who Wins "Idol"?: Not The VIewers!

"American Idol" was simply too painful to fathom. A six-month commitment to the same old shit? Two nights a week to hear "Dawg, that was a little pitchy"? No thanks. I'd rather vacuum the living room.

Out of curiosity, I'm tuning into tonight's final round 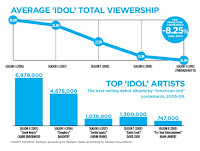 between Crystal Bowersox and Lee DeWyze... with the advantage of having absolutely no investment, so I can watch with total objectivity. And thus: Uh, this is the best America could do? No wonder the franchise is going down the toilet.

It feels like, for the first time ever, "Idol" is truly an amateur competition. Lee: plain, if not downright dowdy, zero magnetism, not an iota of vocal individuality. Crystal:

Boy, she's trailer trash (Ellen would have been more at ease wearing that black dress from Walmart), unpolished and gruff, and about as commercially viable as a millennial Judy Collins.

In a word: Borrring. These two performers make cardboard cutout Ryan Seabreast appear animated (just kidding; not even a hit of ectasy could bring him to life).

"This is what this show is about," Randy just bleated. Ellen: "Someone unique. In a league of your own." Kara: "You were completely emotionally invested. Amaaaazing." Simon: "That was the song of the night." Chuck:

Give me a break. Is there a sincere second to be had here? Does anyone really care whether the Birkenstock folkie or the howling faux rocker wins? "American Idol," it's time to hang it up. This not only made my ears ache, it hurt my feelings.