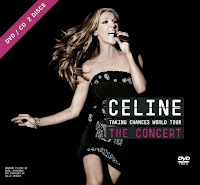 It's a Celine Dion double dose of ecstasy. Today, both "Celine: Through the Eyes of the World," based on her recent theaterical feature film, and "Taking Chances World Tour: The Concert," are being released.

The new DVD version of "Eyes" clocks in at three hours, featuring an additional hour's worth of footage not shown in theaters, while "Taking Chances World Tour: The 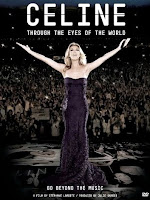 I'm practically beside myself, since it's the first time in 15 years that I haven't received Celine product in advance, via my years at Billboard. But at the same time, there's a certain rush that comes with returning to Joe Consumer status, walking in a store and seeing new Celine in the racks... Oh, wait, what am I thinking? Music stores don't exist anymore. Okay, then, to Amazon.com I go.